I was privy to an amazing conversation just yesterday aboard my American Airlines commuter leg from Dallas to Austin. Imagine in you mind’s eye two semi-bro-ish young professionals from out of town (I think NYC). I heard the word “preso” tossed around a lot. And then, out of nowhere the subject veered into Zima. An annotated transcript is as follows (to the best of my memory):

Dude 1: “So whatever you want man. I think the preso’s tight but we can reskin it.”

Dude 2: “Cool. Where do you want to go tonight? Wherever we go, I want a Zima. You heard about this? I heard it was like the fastest growing beverage ever and then it sort of went away. And now it’s back.”

It was at this point I had to jump in. I just had to. So I turned around and just sort of butted in and let them both know that unless the formula had changed drastically it was going to be one of the worst decisions of their life, how it was a byproduct of America’s brief flirtation with upscale malt liquor and how it flamed out gloriously transitioning from an object of desire to an object of ridicule at light speed. After some polite back and forth I produced the following to put things in perspective for them. 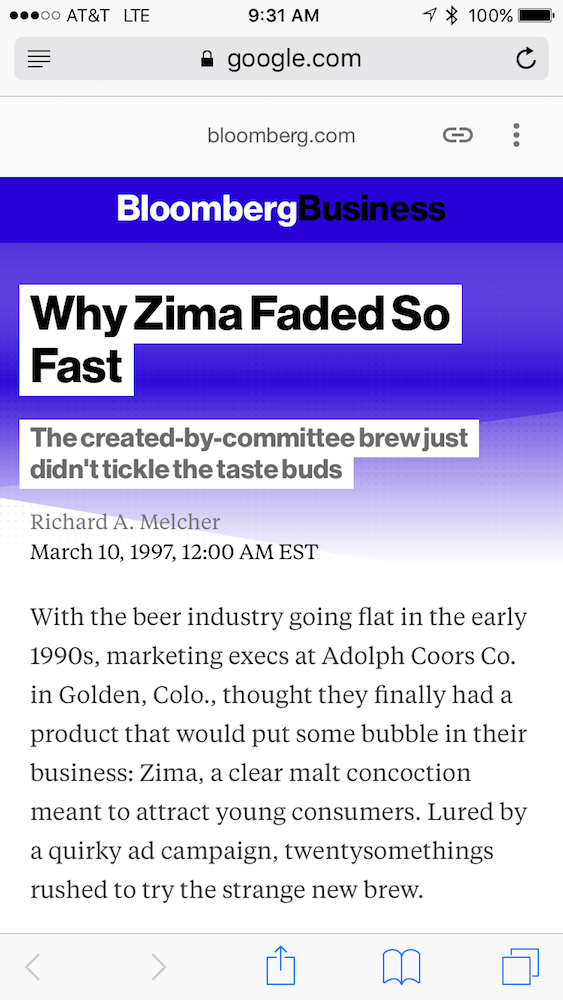 Note that the article was published in 1997. I’ll include more of the article so you know it wasn’t just me. Rather, everyone hated it. 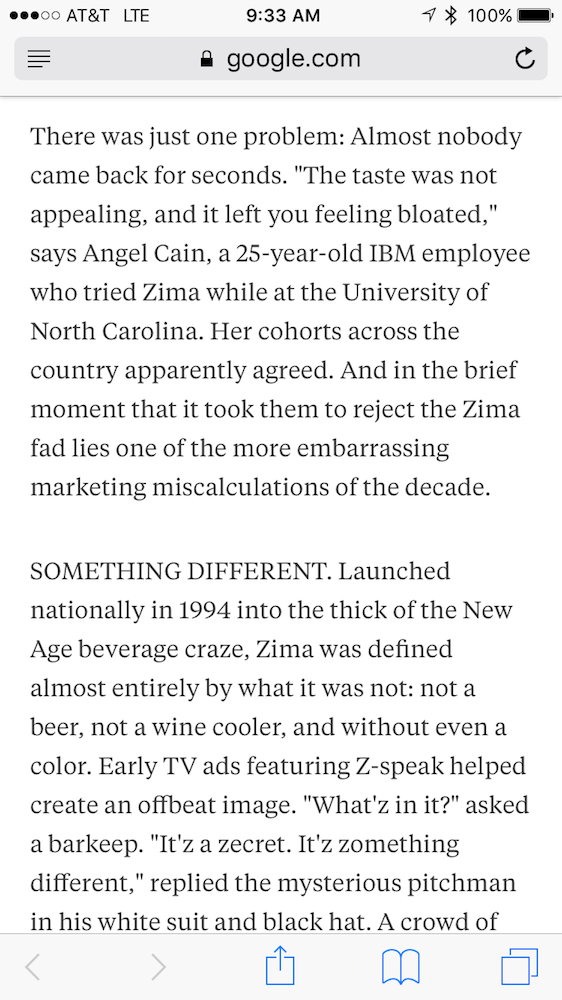 Like the mythical Icarus, Zima soared to the heavens only to fall back down to earth – mortal, a cautionary tale. What the Icarus myth doesn’t talk about is how long he laid there after hitting the ground. In the case of Zima, it lingered on in minor distribution for fourteen years, finally shutting down in 2008. And now, it seems, it’s back. Apparently “with a vengeance” according to Business Insider. 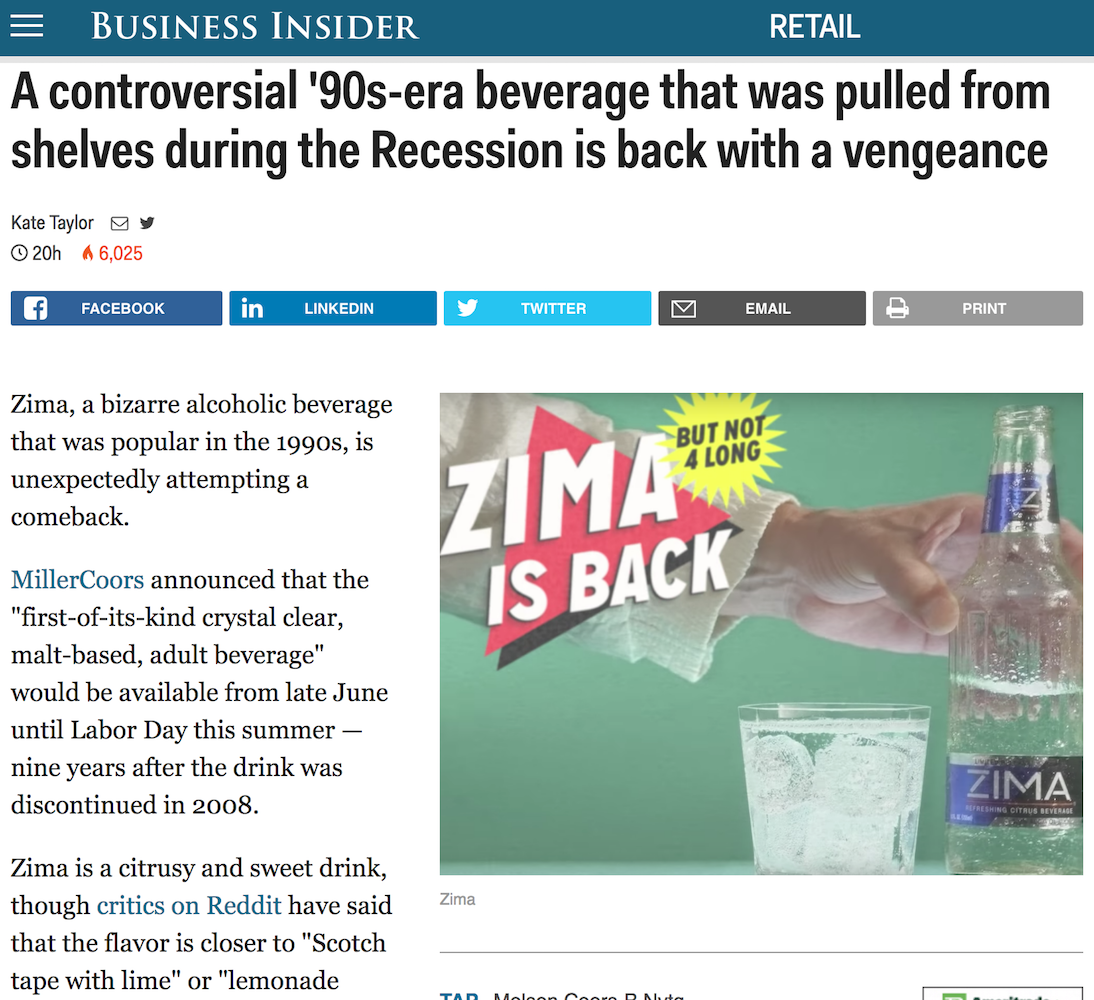 Don’t let the headline fool you. The recession had little do with the brand’s demise. As the article notes it tastes horrible which is hard to overcome, even with a huge marketing investment and broad distribution. 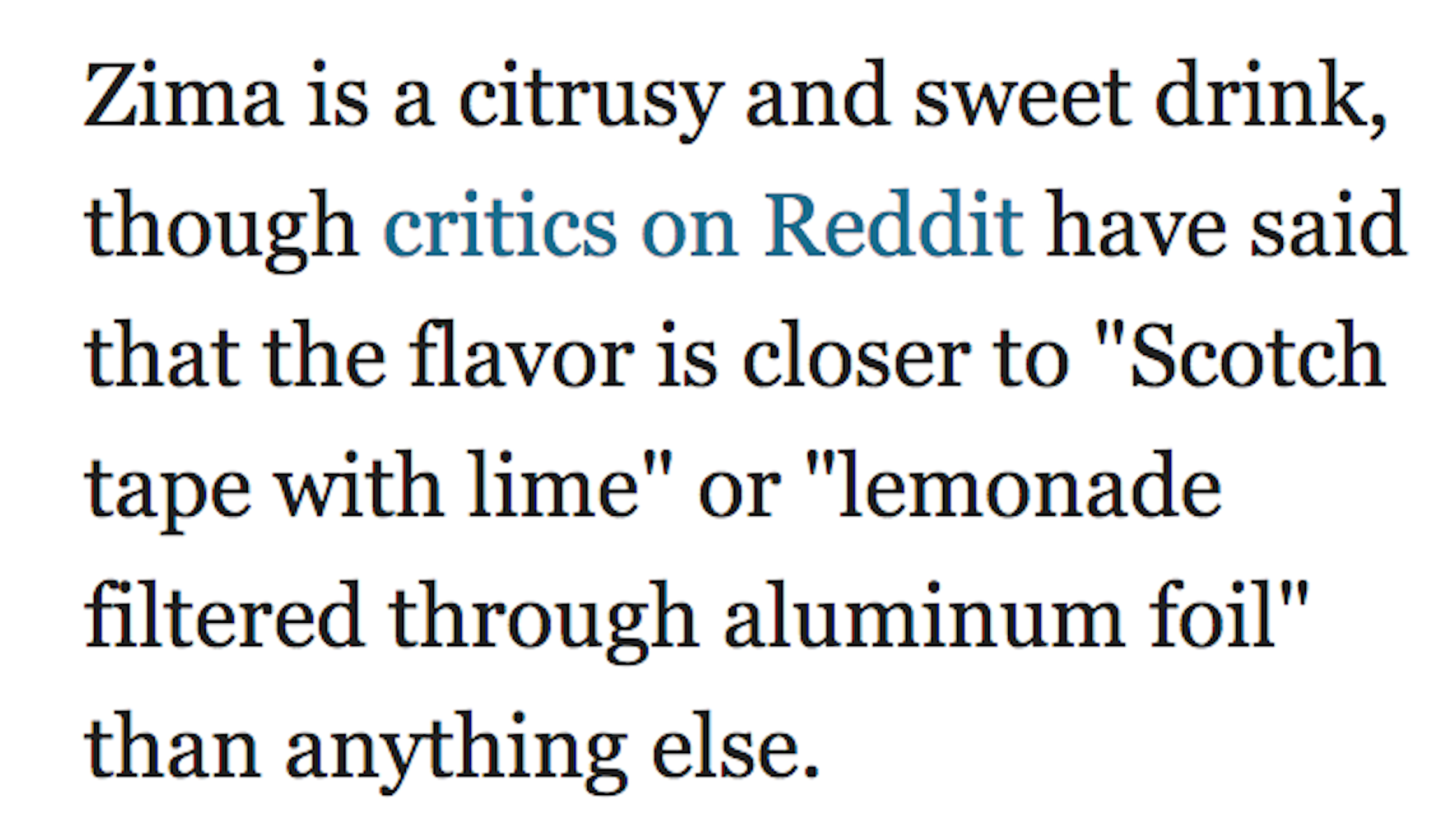 The sheer level of conviction these two obviously intelligent if not a bit dude-ish guys exhibited and the buzz I’d heard about Zima’s comeback made me harken back to my stint in Behavioral Economics at Behavioral Science Lab (Ron, Tim, Christian – I get it, it was brief so don’t mean to overplay my hand, but hey you get some free press).

For those not overly-familiar with Behavioral Economics the premise is surprisingly simple. All those rational assumptions you made about people in traditional economics are generally flawed if only because they assume people are binary and somewhat robotic. Behavioral Economics postulates that in fact people are inherently irrational and that’s not a bad thing. In fact, surrendering to this insight lets you see people (i.e. customers) as dynamic and deep with all sorts of different quirks you can study to better engage with them.

Applying this logic we can look at the decision to re-introduce Zima from an economist’s perspective. A traditional economist would look at the fact that most people say it taste’s awful, how 100% of its initial success was due to its status as a cultural curiosity and how most mainstream drinkers don’t have an appetite for malt liquor beverages. Using these facts the traditional economist would say no, likely with emphasis. If he or she went to a prestigious school like LSE (Nate Silver‘s alma mater) or Chicago Booth (home to the late luminary Milton Friedman) they might even use hoity-toity language such as the word “risible” as in, “that supposition is so preposterous it’s risible!” They might even call the idea “baloney” like the grandfather in Weird Science which is an appropriate reference since that is a hallmark movie for a lot of people who originally tried Zima once only to never try it again. The economist would likely also be wearing the same outfit as the grandfather and have the same mustache.

And that economist would be wrong. I really could stop here. After all, Zima really is back despite logic. But since I’ve gone this far I might as well take it all the way through. People aren’t robots. They are inherently complex with an always changing set of fluid thought processes that ultimately guide their actions. Thought leaders such as Daniel Kahneman, Richard Thaler, Dan Ariely and Rory Sutherland have all spent their lives dissecting and codifying these inherently human traits. There are any number of books available if you are interested in learning more. Rory Sutherland does a great job explaining how both Valentine’s Day and London Cab licenses are both rooted in commitment devices. You really should watch this clip. He’s amazing and entertaining to boot.

While I am more of a BE-ophile and less an accomplished practitioner I will still take a stab at dissecting the Zima phenomenon. If you are reading this, are an accomplished Behavioral Economics practitioner and disagree, please message me rather than ravaging me in the comments section. Also, sake of transparency I outright copied and pasted some of the content below. So it’s not plagiarism just because I didn’t footnote.

Availability Bias: This states that people tend to focus on what easily comes to mind (often vivid or recent events) and give undue weight to those events.

Goal Gradient Theory: People will work harder to achieve a goal as the goal gets closer.

Translated: Every tool helps in the quest to look cool and interesting. Just look at Hipsters and Pabst Blue Ribbon. Granted that’s a weird analogy because both Hipsters AND PBR are inherently irrational so the case could be made that they cancel each other out into rationality.

Herding: People tend to do what others are doing.

Translated: They must know something I don’t ala those two guys I started this piece off with and I want to find out what it’s all about.

Social Proof: The tendency of people to assume the actions of others reflect correct behavior for a given situation. This links to herding.

Translation: Not only do they maybe know something I don’t, the amount of visibility it is getting lends credence to the idea.

Anchoring: The tendency to rely too heavily or “anchor” on a past reference or on one trait or piece of information when making decisions.

Translation: When people are going in a specific direction or even just considering doing so, all it usually takes is one or two anecdotal bullets to substantiate the decision. Again, thinking back to our preso bros at the beginning one of them in fact referenced his particular take on the Zima origin story and essentially used that as a rationale for their decision to try it. Anchoring was also referenced in the HBO hit West World when Sir Anthony Hopkins explained to Bernard how the child story was the central “anchor” for his entire personality. This may be more of a relative than direct comparison but the two concepts relate. Not all thoughts are equal. In this instance preso bro 1 was so enticed by the idea of what he’d seen he put forth an obviously unsubstantiated factoid to sell it to his bromigo.

There are of course other principles and examples. And you find yourself interested in the field the good news is it’s relatively nascent so you have the opportunity to get in on the ground floor.

More importantly, the point is, if you go around assuming the world of your target audience is black and white and rests on certain rigid assumptions maybe try popping opening up a Zima. Take a drink and swish it around. Sit back and think about all the people that are flocking to try it despite the apparently endless flow of references saying how awful it likely is. Think about the meeting at MillerCoors when someone pitched the idea. Think about the follow up meeting when they got the green light. Think about all the press and buzz. Then, let the flavor set in and then tell me what you think.