While Twitter Has A Chance, It Doesn’t Stand A Chance

If Twitter and Pinterest were boxers and Vegas were running a line on the fight I’d take Pinterest every day and twice on Sunday for one simple reason – Twitter is running a rebranding campaign while Pinterest is designing additional utility to grow its user experience. Let’s dive in.

If you haven’t seen Twitter’s most recent attempt to explain why it’s valuable to the general public you can watch it now.

Or you can read about it along with color commentary from Twitter’s head of brand in the Forbes.com article “Twitter Announces New Branding Campaign With Chance The Rapper Commercial.” The storyline goes that connecting with or creating near real time connections with your favorite artist is one of Twitter’s most attractive features. According to the article Twitter and Chance have synergy because, “his use of Twitter is exactly what we’re trying to portray,’ Lunenfeld explained. ‘He really captures the essence of how an artist can connect with people on Twitter.’”

The key word there is portray. Portray is the classic approach espoused in Al Ries’ classic book “Positioning” originally published in 1981. The idea is to just put your finger on that one thing inside your audience’s mind that buys a small parcel of land in their thought process and has been the hallmark of brand building since as long as anyone can remember. Don’t get me wrong, I like branding a company as much as the next guy and spend a fair amount of time doing it. But in this day and age it’s less about what people don’t understand about you if only you could find the right words, and it’s much more about what you’re willing to do to provide ongoing user value. And that’s something Twitter as much as admits it doesn’t get with its constant repositioning and rebranding and total lack of product or experience evolution. Connecting with musicians via Twitter isn’t anything new. And Twitter admits as much. The entire idea came from something Chance has been doing for a while. The company sees it as an under appreciated aspect of their platform.

This is a perfect example of the dual antagonizing forces driving the evolution of brand utility. The premise is simple – we are at the intersection between the decline of advertising and the rise of technology reliance and expectations. The graph is below. Brands have the opportunity to re enliven their advertising investment by using it as a platform to showcase the new utilities it has to offer.

Forrester Research reaffirmed one of the core tenants of this reality with the recent announcement of the end of advertising as we know it. 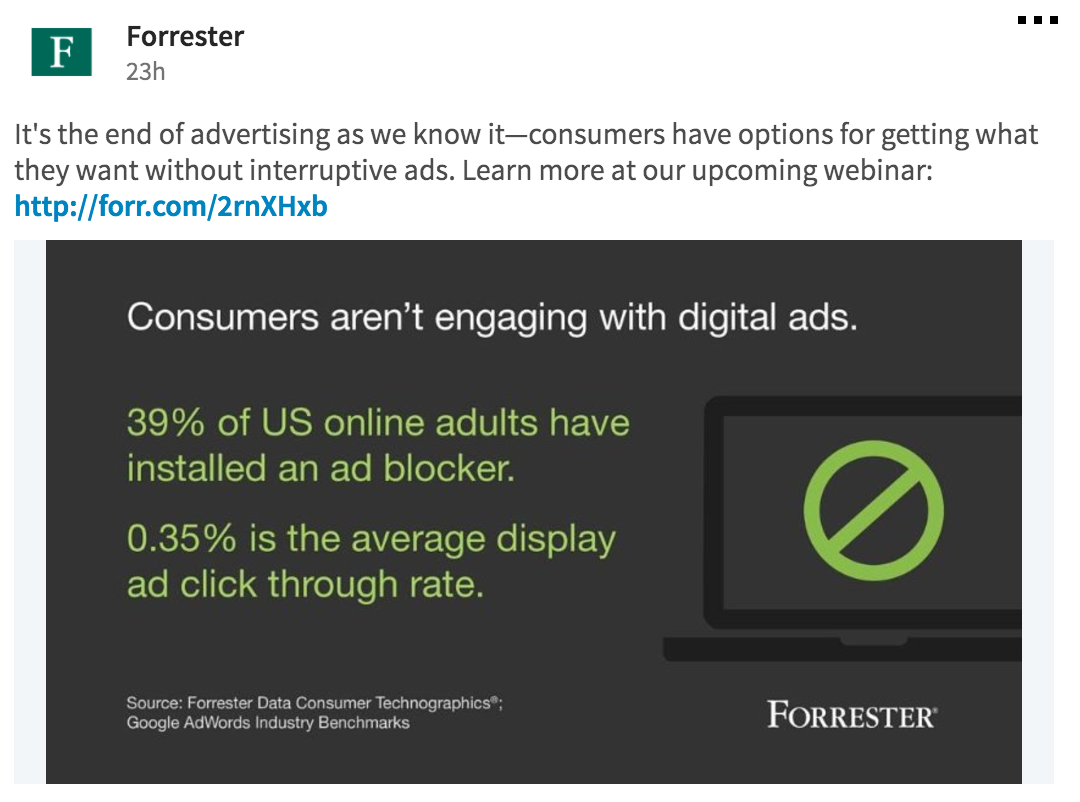 Looking back at our original discussion we can map my argument as follows:

To say advertising is dying is an oversimplification. It’s more apt to say that the current social compact between brands and customers has essentially broken down due in large part to the inherent lack of value or differentiation in most of what consumers are exposed to. This is in contrast to the availability of third party information consumers can rely on to make an informed judgement as described in Itamar Simonson and Emanuel Rosen’s book Absolute Value.

Simonson and Rosen articulate in great detail what many have suspected for some time which is the simple fact brands are less and less a proxy for value with consumers. This fundamental reality essentially means that customers are far more interested in taking a direct look at the product, service or experience and hearing from others rather than just taking your word for it. And inside this truth is an amazing opportunity for brands to use product and service evolution to constantly enliven the customer conversation giving customers better reasons for engaging in the brands marketing investment. In this new world we see how brands have to essentially communicate on four levels simultaneously.

The new model is inclusive of the traditional levels of customer acquisition and retention via brand positioning, product promotion, specials, sales and the like. But it also has to include and invest in an ongoing conversation about how the brand is constantly pushing the boundaries of the product and customer experience, generally through technology.

And when you look under the hood of both Twitter and Pinterest via their blogs you see the clear distinction. Pinterest weaves in a consistent product and experience evolution narrative while Twitter generally talks about things that are of relatively little use to the average user.

I don’t know that Pinterest consciously understands that it’s doing what it should. It’s likely just what they do per their company strategy and ethos. However these are the patterns you should look for to understand who will be winning with customers in the long run.