I just returned from a week in Mexico and it was awesome. We do a family vacation down there annually because we know where the great beaches are and it’s just a three-hour flight. This year was different though because I purposely left my iPhone off for the entire week. Granted, I played a game on my iPad here and there at the end of the evening but leaving my phone in the safe was a real departure. And here’s what I learned:

I don’t say this lightly. I have witnessed addiction and honestly believe this to be a true statement.

You read the headlines about how people get nervous being away from their device and this is understandable. It’s your lifeline to your loved ones and heaven forbid anything happens while you’re away. Personally, I recognize how this really is just an excuse I’ve made to myself. I have iMessage, Facebook Messenger and Slack on my laptop and iPad and my family has my office number as do my kids’ schools. If something went wrong, people would find me. I think we use this supposed all important connection as a rationale for holding onto something that fills the dull moments. And the fear of dull moments, whether that be in a line, or in a meeting or at a stoplight or as we peter along our congested commutes, enables some fairly bizarre behavior.

I was shocked to see people from different countries walking around in some of the most beautiful places you could imagine still tapping away into their device, mindlessly ignoring the grandeur around them. And I only noticed this because I had put mine down. It’s almost like when you hear someone talk about quitting smoking or drinking. They start to regain their sense of taste and smell and finally notice how others who still smoke smell or how others who still drink behave.

Some were facetiming as they walked. Others were pacifying their children in restaurants instead of engaging them, asking them what they’d noticed or if they’d learned anything. I understand distracting your kids when you’re at a familiar restaurant near your home and you may just want to enjoy the meal or catch up with your spouse. I’m as guilty as most on that count. But when you’re in a whole other country that might expose your children to new customs, culture or language, it’s a bit of a head scratcher.

More to the point, when you’re floating down a river in an ancient jungle and there’s someone ahead of you with a plastic cover on their iPhone and they’re texting, you know there’s a problem. The specific person I’m referencing actually had two devices with him, in separate bags. So maybe I should laud him for showing restraint and only indulging one.

I’ve included two pics below of where this took place. You tell me. 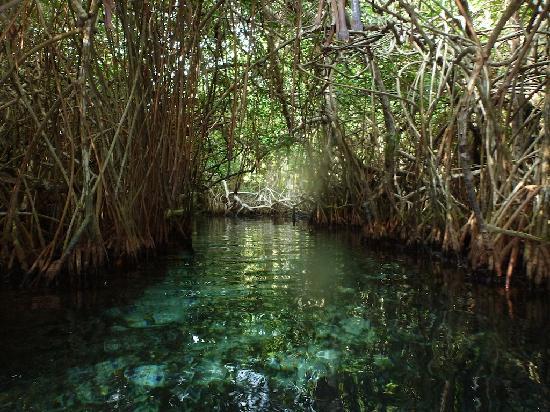 (Pics courtesy of Google Images for anyone who secretly suspects they’ve busted me for having taken pics with my device.)

Is it just me? Or is it a little strange that people can’t be compelled to stop interacting with their device when they’re floating through these experiences? 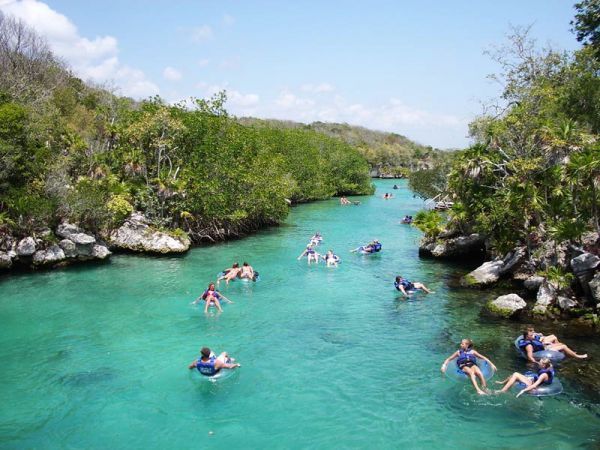 Devices are habit forming. Which led me to my next observation.

Most of the time spent on device is frivolous, if not downright negative.

This first set of observations pushed me to start to think about the quality of most of the time on my device and to be honest, a lot of it isn’t positive or productive. And I don’t think I am alone in this regard.

After I touched down in the states, I of course opened up Slack to find, shock, literally thousands of messages that had popped up during my absence. Countless channels were aglow. I dutifully combed through each and every one of them as I rode on the bus back to get my car. I counted exactly three topics that directly involved me or required my personal participation. Yet I’d spent somewhere between 20 and 30 minutes thumbing through to find this out. Most of the conversations we are exposed to create a sense of tension in our professional lives, as we feel we are obligated to monitor or observe when in fact that time could be spent more productively. To be clear, I am not saying that those projects aren’t important and I’m not trivializing the work of my colleagues. I am saying that communication filtering and less cc’ing or group messaging would go a long way towards improving the time we spend on device. As a result, I will be more aware of this in the immediate future.

The first was on the computer in the lounge in my hotel. As I waited for something to print out I reflexively (not consciously) flicked open a new Chrome tab and typed in the URL. It was an unconscious action that occurred simultaneously with my watching television news with English subtitles. And when my frontal lobe kicked in, it was only because my attention had been immediately directed to a clickbait article on President Trump that predictably made my blood pressure rise, inspiring my fight or flight response mechanism. Knowing the Facebook algorithm specifically serves those articles to me because they make me slow, stop or click, I closed it down and have only used Facebook Messenger since I turned my device back on.

The second was on the final leg of our return flight. Despite numerous requests to turn phones onto airplane mode the gentleman sitting adjacent to me insisted on keeping his device live, flicking through his feed. Mind you he was carrying on a conversation with the woman to his right whom I believe he’d just met. It seemed perfectly appropriate to split time with his newfound acquaintance, yammering the entire time, but only occasionally to her face directly. What was most interesting was how despite the constant flicking, he never seemed to really find anything. He just kept flicking. Flick, flick, flick…

Facebook was a hallmark of almost every device I saw in play during my intermission. But I challenge anyone I saw doing this to tell me how that was time well spent. I even saw it on the boat back from my scuba dive. We just got done spending 40 minutes 75 feet below the ocean’s surface. We’d seen a large sea turtle and moray eel. The guy to my right was messing with his GoPro. The girl to my left? Facebook. She didn’t post or comment mind you. Just flick, flick, flick…

I know, this sounds like one of those luddite screeds you see come across your feed that you dismiss as so overwrought. But those moments spent flicking around weren’t idle downtime. They were just idle. Getting back to my first point, this habit we’ve collectively formed has no real output.

Another trapping of our devices is the focus on micro bursts of content we are constantly asked to consume. I was reminded of this as I managed to make my way through five backlogged copies of Bloomberg Businessweek and four chapters of John Kolko’s excellent book, ”Well Designed”. 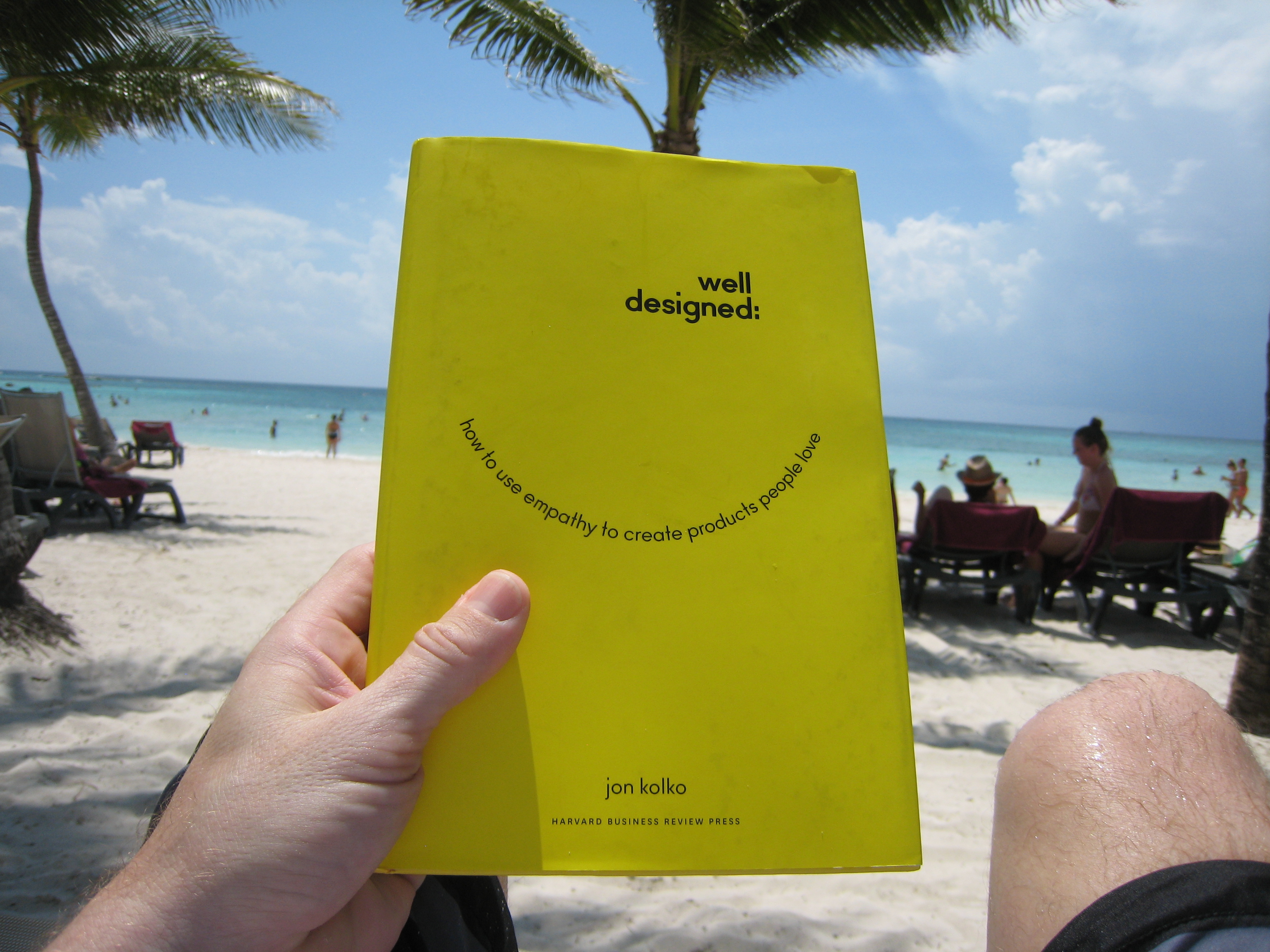 At first, I was convinced that one of the side benefits was improved attention span and mental coherence. And then I reminded myself I was sitting on a beach so the side effect likely had more to do with getting some rest and relaxing than device versus print. However, I will say that I feel I really did get more out of reading good old school magazines and books than all the articles I’ve jumped off into from various social streams.

If the time we have is finite and the content we consume during that time has to take a form, I’m glad I found my way back to print and text. I’ll be the first to admit that I am overly reliant on Audible but don’t see that dying any time soon. At the very least, it’s my hope that I can re-engineer my content diet to be less reliant on device and even browser-based content and more so on more traditional formats.

I honestly do think I’ve come back from this device intermission a somewhat changed man. For how long remains to be seen. But the distinct experience was so vivid when it was happening I hope it sticks with me for some time to come, at least until I can get back to the beach. I’ve learned some very valuable lessons and find myself being much more purposeful with what device actions I do take and which apps I click into. I’m trying to treat my device as more of a tool and less of a crutch.

You should give it a shot. Try and put your iPhone away for a week and see what happens. You don’t have to go to the beach to try (though it helps, immensely). After you’re done, message me and let me know what you experienced. I’d be interested to hear if it had the same effect on you.