Facebook Takes Back The Spotlight From Snapchat, For Now

For the past ten years, Facebook’s F8 developer conference has given developers and marketers a first look at what Facebook sees as important while also presenting their strategic direction for the year to come. Last year’s event focused on the platform’s ten-year roadmap, the elevation of Facebook Messenger and the introduction to chatbots in the customer experience, and the democratization of virtual reality. 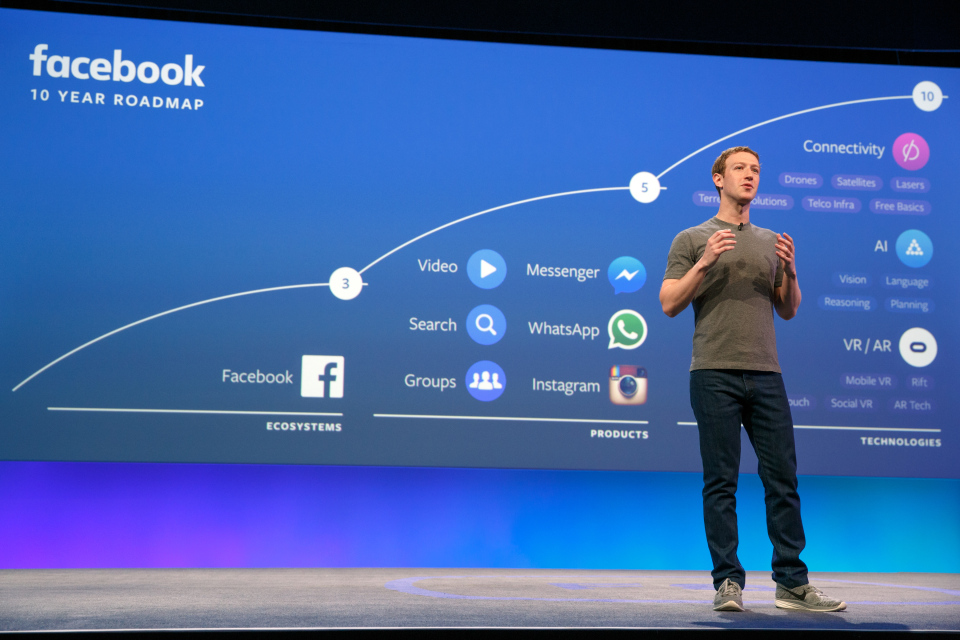 When the dust settled on this year’s conference, two big themes emerged. Building community beyond the friends and family in your newsfeed has become increasingly important to the platform. And whatever your reality, be it augmented, virtual, or real, Facebook wants to help you to express, discover, and connect on your own terms. In some ways, these themes are a refined escalation of last year’s initiative.

Last week, I wrote about the behavioral shift from social media broadcast to more intimate social messaging conversations, and how brands can start thinking about ways to enable and empower audiences in this emerging 1:1 reality (versus the 1:many reality social has been based on since its inception).

By the end of F8 it was clear that Facebook was looking toward how they could layer community and enhance those intimate 1:1 and 1:few conversations. 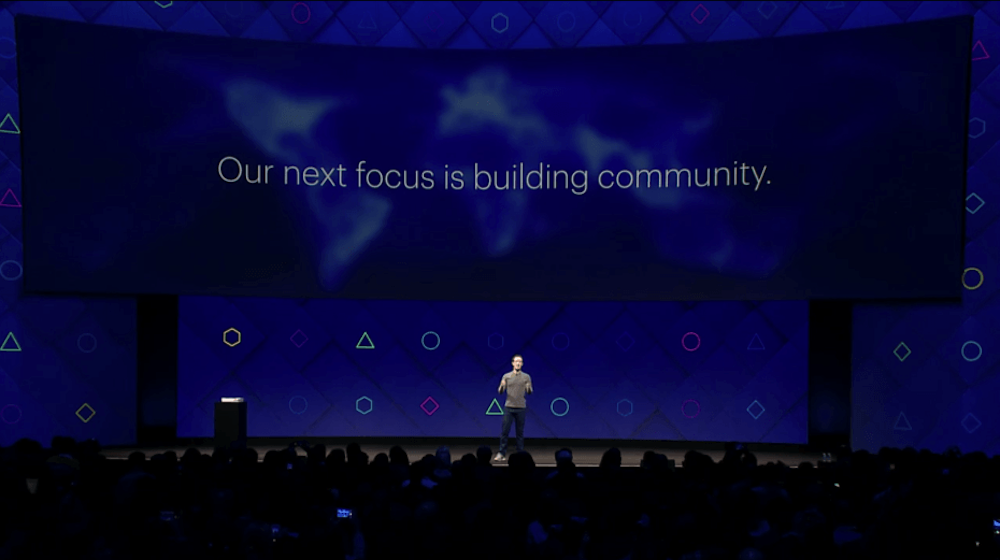 While Facebook’s mission has always been to make the world more open and connected, our familiarity with platforms and how we connect and share is changing thanks to platforms like Snapchat, Instagram, and other unique messaging apps. We no longer live out loud 100 percent of the time. And yet, we’re only connected to the people we know and only exposed to the opinions we’re already familiar with. This echo chamber has contributed to the rise of fake news. Facebook recognizes that behavior and that we want to have conversations digitally in the way we have conversations in real life (i.e., we have 1:1 and 1:few conversations versus the 800 friends you have on social media). The platform wants to refocus on intimate relationships and also allow us to rediscover a more diverse community, and they are suggesting that technology can help us do this. It will start with the camera in our pockets. 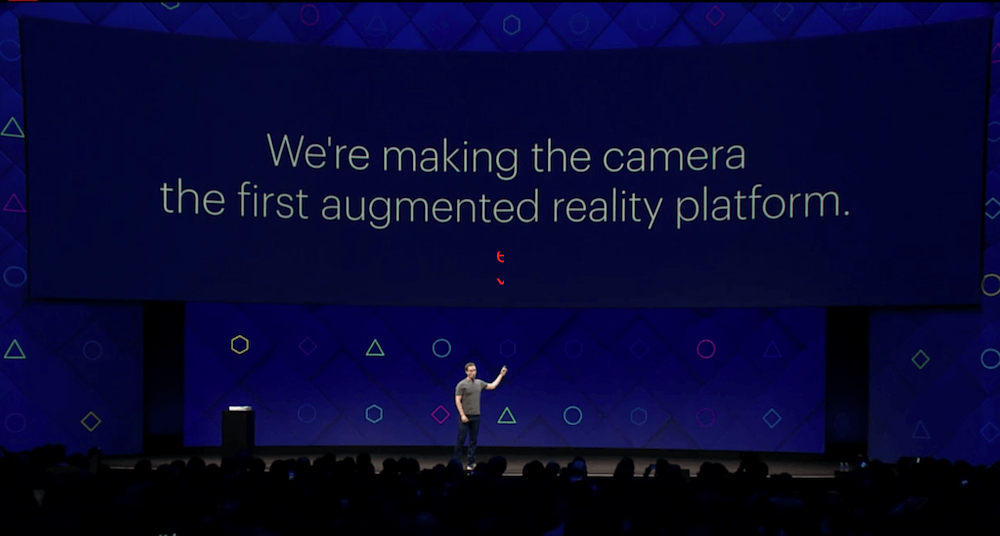 Mind you, this is not something new. Snapchat has been at it for a while. 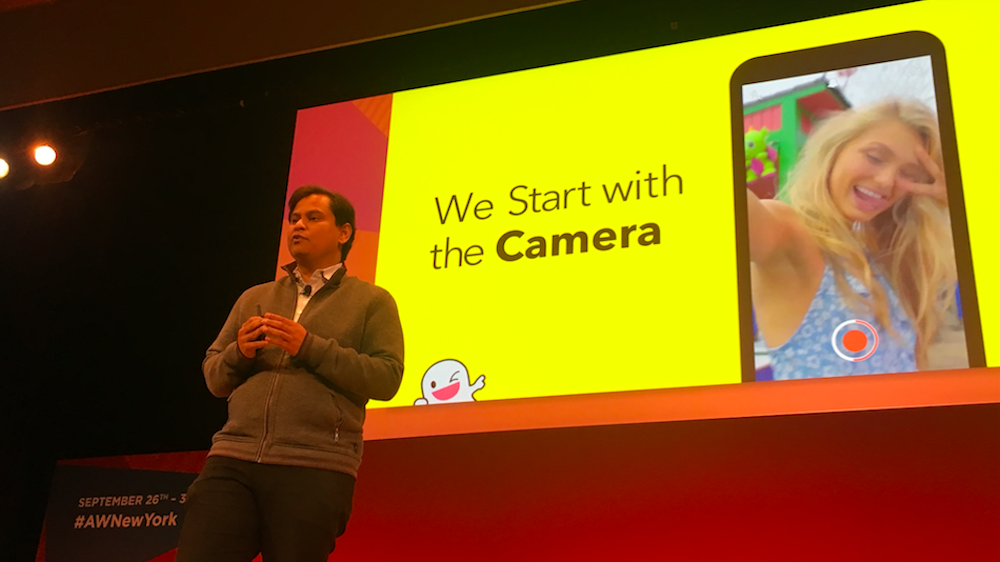 In fact, Facebook has been accused of outright theft of Snapchat’s offerings for nearly a year as they’ve added Snapchat-like Stories and camera special effects to all of its core social apps. Many have started to wonder if Facebook is still interested in innovating. At the initial launch of Stories for Instagram, for example, it felt like Facebook was just giving us something we already had—and it wasn’t as good as Snapchat.

But that was then, this is now. Even with the launch of “World Lenses,” Snapchat’s latest evolution of their widely popular facial AR lenses two hours prior to F8’s keynote, Facebook showed that while they may have used Snapchat’s features and functions as a point of direction, they are ready to lead the way yet again. The launch of World Lenses felt less like stealing someone’s thunder and more like an effort to get back out in front of the competition.

If Facebook was laying a foundation over the past year by integrating products that users were behaviorally and functionally familiar with, they are certainly ready to build on that foundation—this time with augmented reality (AR). They now seem poised to use phone cameras to build the world’s first mainstream augmented reality platform. How they will do that at scale is how the platform has historically had success: They have called multitudes of developers to build immersive experiences and enhancements around objects and places. Consumer empowerment is powerful and will accelerate adoption and ultimately influence consumer behavior toward a new social normal. 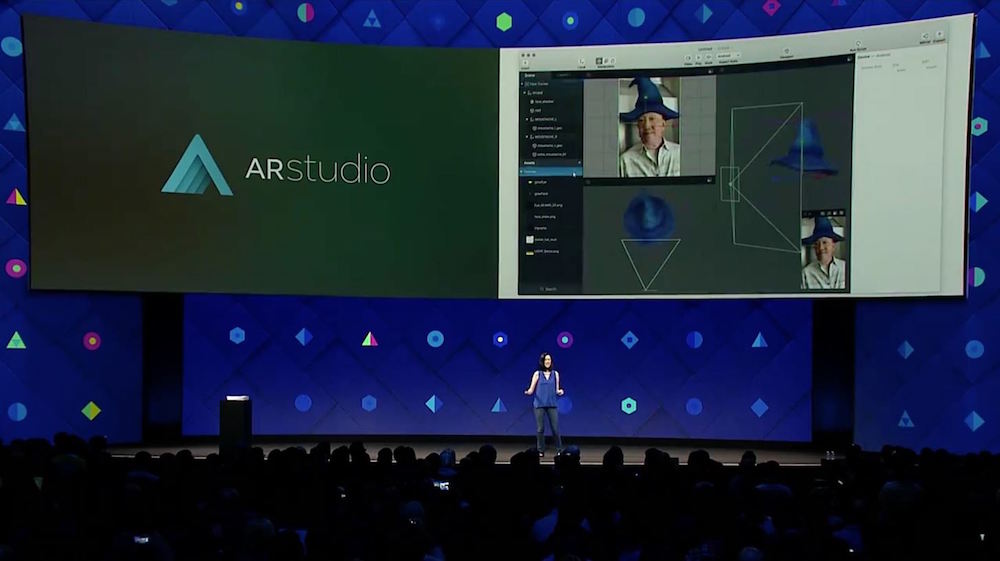 Facebook is keenly aware that the democratization of augmented reality has the potential to open up entirely new forms of advertising revenue and content consumption. While the immediate application for AR is turning our faces into Starbucks Frappuccino Unicorns and games like Pokémon Go, the eventual goal is much bigger. If Facebook can deliver mainstream glasses that have AR built into them, for example, they will allow all of us to remove a number of physical barriers from television to urban wall art. This kind of immersion could be groundbreaking.

A large part of the user experience will be mixing the digital and physical through geo-targeting, object recognition, display of information, and creative effects. Real-world applications could allow users to leave reviews in physical locations. Brands could also create experiences that guide consumers. Imagine walking a grocery aisle and being prompted by a consumer, friend, or influencer review followed with an offer. Consumers could participate by sharing an offer or review by leaving a note behind for another consumer. AR in this use could be a game-changer for retail and CPG brands. 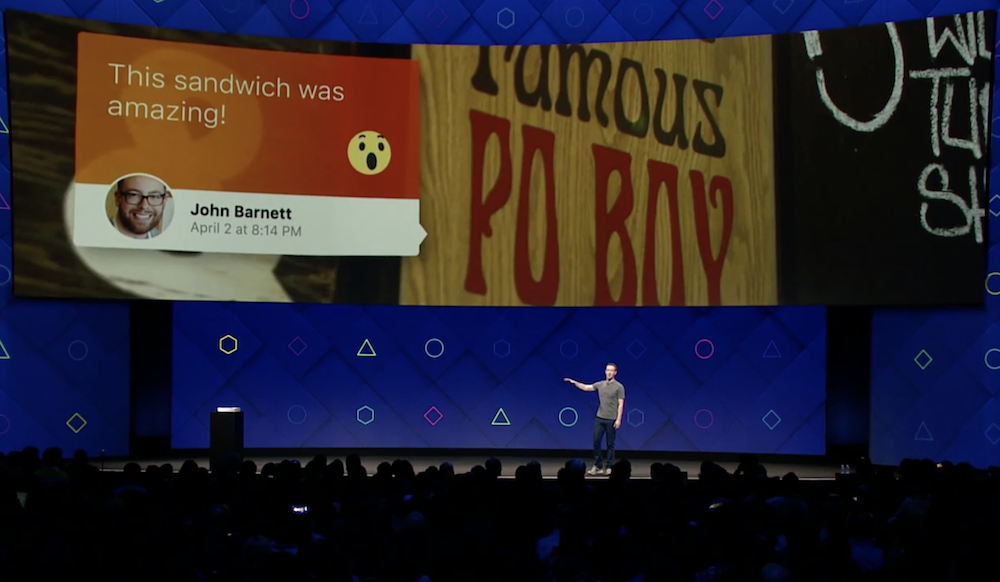 In 2016, Facebook beta-launched Messenger and helped to drive consumer to brand communication. With the help of independent developers, the company created an ecosystem with 1.2 billion active users, 65 million businesses, and 100,000 chatbots. 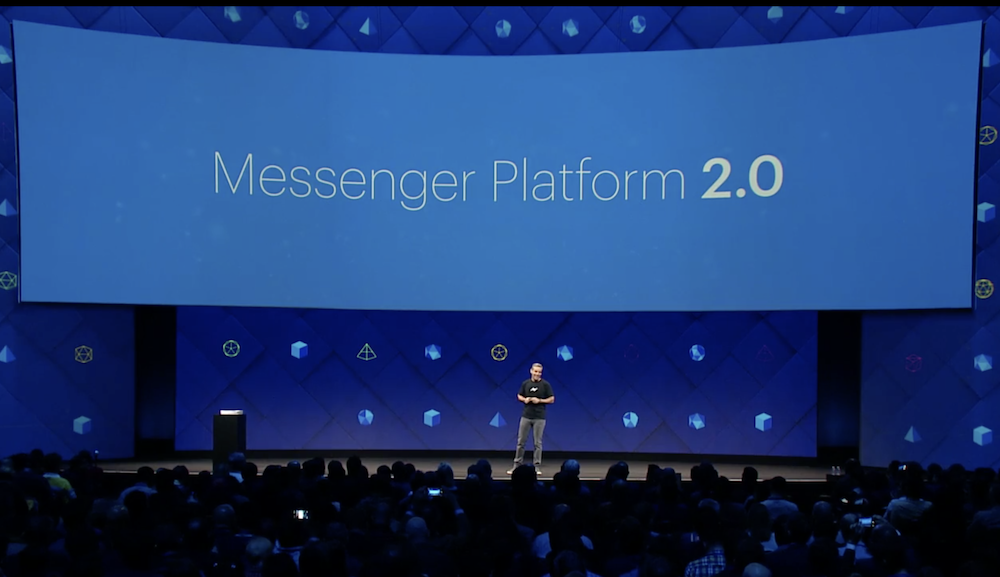 This year, Facebook rolled out Messenger 2.0, calling it “the new social living room for the world, where people can hang out, share, chat, play games or buy things, while still being able to reach nearly everyone, wherever they are.” Included in the new app is what’s known as Chat Extension, which lets you find and use bots in group discussions. This means you can enable bots in a group messaging situation that will ping you with sports scores, e-Commerce updates, and travel deals. The ability for brands to connect in the right ways in this new 1:1 and 1:few environment is going to be critical, and Facebook recognizes that. Chatbots will help scale the effort. Already brands such as the NBA, Kayak, OpenTable, Spotify, and The Wall Street Journal are launching group bots for use in messaging apps. 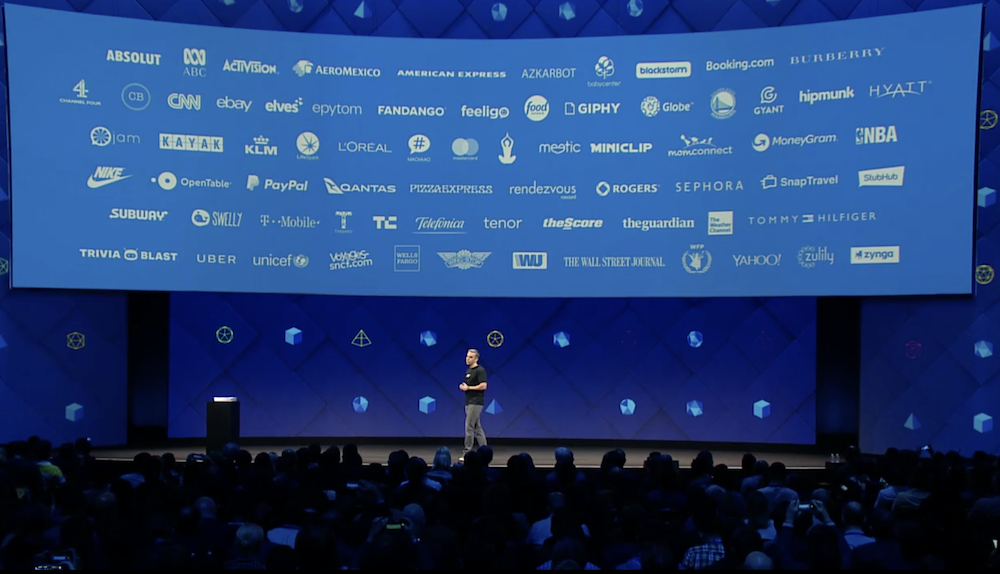 Also announced was the launch of the Messenger app’s Discover Tabs, a feature that makes it easy for users to find business bots they care about. This allows the platform to enhance the user experience through discovery “combining two tools of the past—the telephone directory (the way we used to find people) with the Yellow Pages (the way we used to find businesses).” 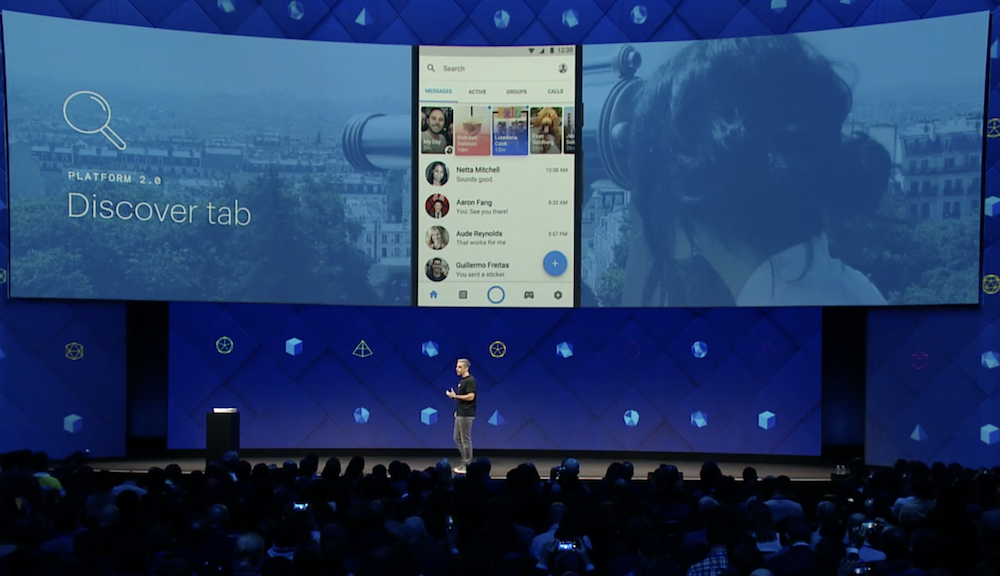 We can also expect more from M, Facebook’s virtual assistant. This artificial intelligence platform is integrated into Messenger, and its goal is to learn and recognize when users are doing a specific task and provide suggestions. It could be as innocuous as suggesting the right sticker to send a friend in conversation or asking if you would like to order food through its delivery.com extension if you are talking to friends about dinner. Like everything with Facebook or Google, the more you use M, the better and more relevant it becomes. Admittedly, the idea of living the Tony Stark life and having my own personal Jarvis without paying Tony Stark prices is appealing, others may find it creepy and off-putting. It will be interesting to see adoption and usage rates in the future.

The other big announcement that carried over from 2016’s F8 was Facebook’s push to democratize VR. That announcement was not a huge surprise after the company’s acquisition of Oculus. But it was surprising this year since Facebook shut down nearly half (200) of the 500 Oculus pop-ups in Best Buy retail locations in February. 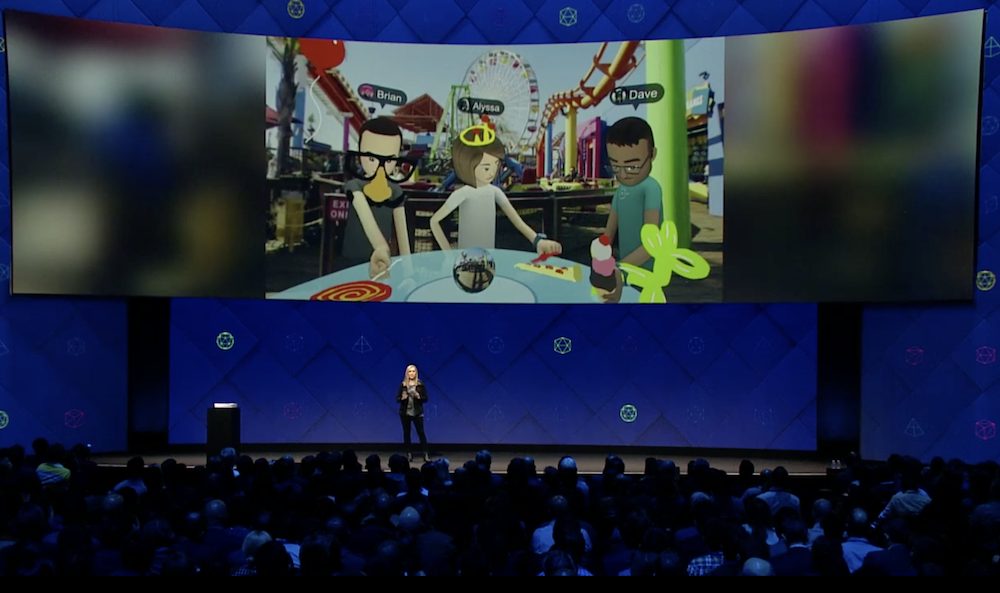 Nevertheless, at F8 the company launched Facebook Spaces, a social VR experience “where users can interact in-person with friends and family in VR, having a fun and meaningful experience, no matter where they are on the planet,” according to the press release. Users will be able to create VR avatars (more robust Bitmojis) and interact with connections in various ways from virtual selfies to surprise birthday parties to 360 video. 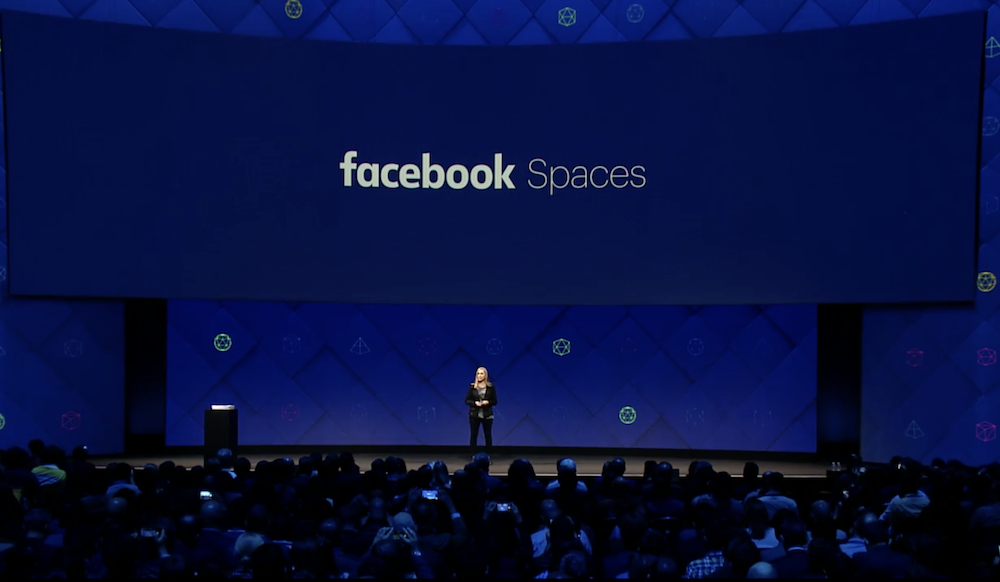 Facebook’s belief is that VR has a powerful social potential as a platform for connection and community.

Spaces is in beta now and it’s available only to Oculus users, but once the FB VR world expands, the experience could be available to everyone through multiple platforms.

Most recently, VR has been treated as a novelty—something to experience at a trade show—but it’s starting to creep into the mainstream. At this year’s SXSW conference, Tom Cruise’s “The Mummy” provided one of the best immersive 360 VR experiences I’ve encountered, allowing viewers to get a behind-the-scenes look at the filming of a zero gravity scene.

As VR becomes more fully adopted as a utility—and less as a novelty—marketers and brands will need to understand how audiences and customers engage with virtual content.

I came away extremely impressed by Facebook’s forward focus toward building community, their integration of AR, their enhancements to Messenger, and their pivot for making VR more consumable and shareable. I see a world of new positions created, where Digital Rights & Experience Architects have a seat at the table with Strategists and Developers and where brands and marketers focus on creating and integrating experiences as opposed to content calendars in the not so distant future.

The Anxiety Of Influence